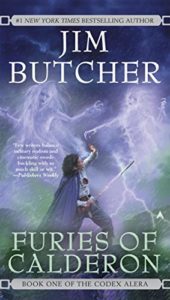 Furies of Calderon by Jim Butcher

I read Jim Butcher’s Dresden books years ago and really enjoyed them.  The Codex Alera series, however,  are a different genre of book.  The Dresden books are urban fantasy or supernatural mysteries. IOW, the books are set in the “now” with magic incorporated. Furies of Calderon however is high-fantasy.  So, I was a bit hesitant about jumping into the series.  But, I’m glad I got over my hesitation.

I really enjoyed this book.  Strong characters and writing, a great plot, and Butcher’s totally mastery of his story.  I downloaded a copy from audible, but then went and bought the eBook as well.  I was just too impatient to only listen to the book, so I went back and forth, depending on whether I could listen or read.  Now, I don’t know whether to download the second book in the series — which I plan to do — in audio or as an eBook.  Maybe I’ll do both again.

From the Back Cover

For a thousand years, the people of Alera have united against the aggressive and threatening races that inhabit the world, using their unique bond with the furies—elementals of earth, air, fire, water, wood, and metal. But in the remote Calderon Valley, the boy Tavi struggles with his lack of furycrafting. At fifteen, he has no wind fury to help him fly, no fire fury to light his lamps. Yet as the Alerans’ most savage enemy—the Marat horde—return to the Valley, Tavi’s courage and resourcefulness will be a power greater than any fury, one that could turn the tides of war…