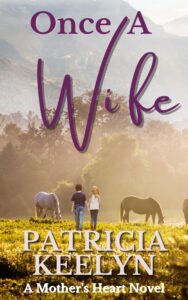 Even the weather had betrayed her.

The day should have been dim, with gray wintry skies. Instead, cold clear Wyoming sunshine streamed through the dingy second-floor window where Sarah Colby stood watching the parking lot below. Leaning forward, she pressed her forehead against the icy glass, letting it soothe her fevered skin. She closed her eyes, welcoming the momentary relief, wishing she could as easily ease the ache in her heart.

She thought of her son, Drew, sleeping soundly in his crib behind her. How could she leave him? Or face the future knowing she would never again take him in her arms, never feed him, never care for him? But that was the problem, wasn’t it. She couldn’t care for him. Not the way he needed.

Now there was another baby to consider. The unborn child she’d kept secret. What kind of life could she give either of her children if she stayed?

Sarah turned from the window and moved to her son’s crib. Soundlessly, she reached down and brushed her fingers across his silky dark hair. He looked so perfect. You couldn’t even tell he was sick.

But she’d learned that looks could be deceiving. Juvenile diabetes, the doctors had said. A disease that would affect him for the rest of his life. She’d never even heard of it until a couple of months ago.

Nor had she had any idea about the expensive medicine he would need, or the constant care. She would have given her life for her son, but she hadn’t the means to guarantee his health. Without her, though, Drew would get everything he needed. He’d have a chance.

She pulled away, resting her hands on the wooden rail. The feel of the polished surface beneath her fingers made her think of her husband Reece and the hours he’d spent restoring this old crib. It seemed so long ago, much longer than ten months. They’d been happy then, and so much in love as they’d awaited the birth of their son.

They’d been so young.

Decades older than her eighteen years.

With one last look at Drew, she returned to the window.

Reece should be home soon. That was, if he didn’t stop at Belle’s first, where no one seemed to care that he was two years shy of the legal drinking age. More and more lately, he’d taken to stopping at the bar with the other men from the construction crew. And no matter how many times she told herself not to nag him, they’d end up fighting afterward about his drinking.

Today, she’d called the construction office where he worked and left a message that she was sick. That much was true. But it wasn’t her real reason for the call. What she had to do was going to be difficult enough. If she waited until Drew awoke, she’d never be able to go through with it. So Reece needed to come home. Now. If he’d gotten the message.

Then she would leave this apartment, this town, and try to forget she’d ever been in Laramie, Wyoming. She’d already packed, two suitcases and a box of mementos, and loaded them in the trunk of her car. There was nothing left to do but wait. And think.

The words came back to her, floating through her thoughts, reassuring her. Words her mother-in-law had spoken in this very room not four hours earlier. Words Sarah needed desperately to believe.

Outside, Reece pulled up in his sleek black Corvette, jarring her back to the present. He’d wanted to sell the car months ago—and God knew they needed the money—but she wouldn’t let him. The car was the only thing he had left of the life he’d known before marrying her, the life she was giving back to him today.

As he climbed out of his car, Sarah caught her breath. It amazed her that, after all they’d been through, he still had the power to take her breath away. He’d been his hometown’s fair-haired son with his tall athlete’s build and his blond good looks. She’d never understand why he’d chosen her when he could have had anyone. But he had. And look where it had gotten him.

By the time Reece stepped through the door, she sat waiting for him on the couch, her coat over one arm, her purse clutched tightly in her lap.

“Sarah?” Reece looked at her, concern darkening his blue eyes. “Are you okay?” Without bothering to remove his coat, he crossed the room and laid his hand on her forehead. “God, you’re burning up.”

His concern nearly crumbled her resolve. For a few seconds, she considered throwing herself into his arms and telling him everything—about his mother’s visit. And about the new baby. She wanted to lay her problems at his feet and let him sort through them. Just as she’d done more than a year ago when she’d told him about Drew.

Instead, she stood and took a step away from him. She couldn’t lean on Reece anymore. He was too young to be saddled with a wife and a sick child—his mother’s words, but no less true because of their source. Reece deserved more. He should be in school, not working a minimum-wage construction job and frequenting bars with men twice his age. And for once, Sarah was going to do the right thing. With her gone, his family would step in and take care of both him and Drew.

“I’ve got a touch of the flu,” she said, putting some more distance between them. “But that’s not why I wanted you to come home.”

“You need to see a doctor.”

“We can’t afford a doctor, Reece.”

She saw the frustration cross his features, those perfect all-American features that set him apart from her own half-breed heritage. “I’ll give Doc a call—”

His expression clouded, and then, for the first time, he seemed to notice the coat she was holding. “Where are you going?”

She gripped her purse tighter. “I’m leaving you.”

She lifted her chin and toughened her expression. But it was hard. So hard. “I’ve had enough.”

“Enough? What are you talking about?” He closed the space between them and grabbed her arm. “You can’t leave.”

“Watch me.” She shook off his hand. “This marriage business hasn’t turned out the way I expected.” She moved toward the door and set her purse down to slip on her coat. “I thought your family would come around eventually. But it’s not going to happen. They’re going to let us rot in this hellhole of an apartment until we’re old and used up.”

“What about Drew?” Reece’s confusion had turned to anger, and the accusation in his words sliced through her heart. “Are you just going to walk out on your son?”

It’s for his own good, she wanted to scream. And for yours. Instead, she shrugged and forced a disinterested tone into her voice. “He’s your son, too. You take care of him.”

For a heartbeat, Reece remained silent, the anger in his too-bright eyes washing over her. Then he said, “Tell me this is some kind of joke, Sarah.”

She wished she could, but she shook her head. “I’m tired of being poor. And,” she forced the lie, praying he’d believe it, “I’ve found someone else.”

He flinched as if she’d struck him. He took a step backward, his face a mask of disbelief while his eyes filled instantly with pain. “I don’t believe you,” he said, his voice a ragged whisper.

It took all her willpower to continue to meet the anguish in his gaze without begging for his forgiveness, all her strength to continue the lie. “Believe it.”

“Don’t do this, Sarah.” He moved toward her, but she took another step back. She couldn’t let him touch her again. If she did, she wasn’t sure she’d be able to go through with this. “Whatever’s wrong, we can work it out.”

“I love you.” This time he succeeded in grabbing her arm. “I thought you loved me.”

She braced herself for the biggest lie of her life. “Well, you thought wrong.”

4 Responses to Once A Wife