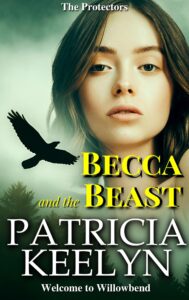 An easy death. Painless. It would be like falling into a deep, dreamless sleep. And right now, as Rebecca Adams hunched down out of the wind, amidst a tumble of small boulders, sleep sounded so wonderful. So tempting.

Shivering, she tightened her arms around her middle. It didn’t help. The cold seeped beneath her damp windbreaker, steadily stealing her warmth. It was still an hour before sunset, but with each passing minute, the shadows lengthened, deepened, and the temperature dropped another degree.

The day had started so perfect, warm and clear with the mountains beckoning her. She hadn’t planned on hiking far, only an hour or two into the hills above her cabin. It had felt good, courageous and adventurous, to be alone and free, with no one to question her. No one to argue with. No one to fear.

When she’d realized how late it had become, she’d been walking for hours. However, she’d still had plenty of time to get back to her cabin before dark—until she’d slipped and fell in a chilly mountain stream, twisting her ankle. That had been her fatal mistake.

Now, after stumbling downhill for what seemed hours, fear and frustration threatened to overwhelm her. She needed to rest. Catch her breath. Steel herself against the cold and pain in her ankle. If she could just close her eyes for a minute or two . . . . The pull was so strong.

Closing her eyes would be a mistake, and she’d already made too many today. There was a fine line between courage and recklessness, and she’d crossed it. She’d come so far these last few months, worked so hard to make a life for herself. She couldn’t give up now. Not without a fight.

She needed to keep moving.

Grabbing the sturdy branch she’d been using to help herself walk, she pulled herself back to her feet, testing her ankle, letting it take some of her weight.

Okay. So it hurt. She’d get through it.

She started out—shakily at first—awkwardly using the branch to lighten the load on her injured ankle. She could do this. One slow step at a time. Ignore the pain in her ankle. Ignore the chill of the quickly approaching night. Just keep walking. She was doing good. She was going to make it.

Then she slipped on a patch of wet leaves.

Instinctively, she brought her full weight down on her injured ankle. Pain shot up her leg, tumbling her again to the ground. Tears of frustration and pain filled her eyes, while her ankle throbbed beneath the tightly laced boot.

She was such an idiot. She could not believe she’d gotten herself into this situation. What had she been thinking, hiking in these mountains alone? Even though these woods were new to her, she knew better. Didn’t she? Of course, that was the problem, she hadn’t been thinking, just reacting to her new-found freedom.

Okay, Rebecca. Pull yourself together.

She’d gotten herself into this, she’d get herself out. There had to be a way. There was always a way out. She, of all people, knew that.

Taking a deep breath to steady herself, she studied her surroundings. A little farther down the hill, she spotted a low rock face, a slice in the side of the hill surrounded by dense forest of Ponderosa Pine. If she got out of the wind, maybe even found a cave, or at least a sheltered overhang, she could start a fire. She had matches and could gather wood, on her hands and knees if necessary. It was early fall, and though it would be cold tonight, if she could just get dry and out of the wind, she could survive until morning.

Again, she started to pull herself to her feet

Suddenly, a warning trickled down her spine, a chill and heightened awareness of danger. She’d experienced the sensation too many times in her life to ignore it. When she’d been a child, it had often awakened her in the dead of night, warning her to hide. Later, it had alerted her whenever Carl had had too much to drink, or was just feeling mean. She knew this feeling all too well and had learned long ago to heed its warning.

She studied the shadows at the edge of the trees.

Then she twisted to scan the jumble of rocks she’d recently deserted.

Lastly, she turned to the low cliff where she’d hoped to find shelter. Where was it? She started to look away, and then stopped. Caught. Two bright spots of color in the fading light sent a fresh chill skittering along her nerves—yellow eyes, watching her. Slowly she made out the rest: the low, sleek body, the small head, the tawny gold pelt.

On the rocks above her head, crouched a mountain lion, a predator watching its prey.        Rebecca tried to remember what she knew about mountain lions, but her mind went blank. All she could think was that somehow she had to defend herself. She needed a weapon. She clutched the branch she’d been using as a crutch, but knew it wouldn’t provide much defense against the cat. She dropped it and grabbed a fist-sized rock. It was probably as useless as the stick, but it was all she had. If she waited until the cat came closer, a well-aimed strike to the head might just . . .

Suddenly, a giant of a man emerged from the shadows and stepped between her and the cat. “Back up,” he said, though he never even glanced in her direction.

The animal started, barely, and settled back in a crouch with a soft yowl of warning.

Startled, at the cat, at the man, Rebecca froze.

“Move.” His voice was low, demanding.

Rebecca scrambled backwards, using her arms to pull herself across the rocks, without taking her eyes off the cat. The animal’s attention, however, had shifted to the man. Rebecca sensed its new hesitation. This large man wasn’t the cat’s intended prey. He was too big, too intimidating, too dangerous.

“Go on.” The man spoke to the cat, his voice almost too quiet to hear. “There’s nothing here for you.”

The cat let out another off-key yowl in protest.

“Go,” the man said again, in that same deep voice that had mobilized Rebecca.

The cat made one final protest, a sharp snarl, before disappearing. One moment it had been there, and the next it was gone, as if melting into the surrounding rocks. Almost as if she’d imagined it.

Then the stranger turned to face her, awakening a different kind of fear. Darker and more familiar than the terror roused by the mountain lion, this fear had lain dormant for nearly a year.

She couldn’t answer, not with this giant hovering over her. He reminded her of the tall evergreens that forested these hills, though his build was closer to that of the massive Redwoods of California than the slender Ponderosa Pines of Eastern Wyoming. Only this giant wasn’t a benign tree, but a man. A large, dark, dangerous man.

“Are you hurt?” he asked again.

Rebecca, realizing she’d been staring, lowered her eyes and found her voice. “I twisted my ankle.”

He seemed to hesitate a moment before extending his hand. “Come on, I’ll help you up.”

Looking at his hand, his large, very masculine hand, she couldn’t make herself take it. “I don’t—”

“We need to get out of here”—impatience edged his voice—“before the cat changes her mind and comes back.”

Rebecca threw a quick glance in the direction the animal had disappeared, but that didn’t change her reluctance to accept this man’s help. Motioning toward the heavy stick she’d tried to walk with earlier, she said, “Hand me that branch.” She couldn’t let him touch her. “I can use it like a crutch.”

He frowned but did as she asked, and she slipped the rock she’d meant for the cat into her pocket.

That’s when she spotted a second animal watching them from the edge of the trees, its dark coat barely visible in the fading light. At first she thought it was a dog but quickly realized her mistake. It was a wolf. She’d done some research on wolves for a book she’d illustrated last spring and knew there hadn’t been any in these hills for over twenty years.

The man followed her gaze to the animal as it stepped from the trees into the clearing. “No,” he said.

The wolf stopped, studied the two humans for a moment, and then faded back into the woods.

Turning to Rebecca, he said, “There’s nothing to fear from the wolf.”

For some reason she believed him, but she couldn’t take her eyes off the spot where the animal had disappeared, nor bring herself to look at the man. “He listened to you. Just like the mountain lion.”

“The cat would have killed you.”

She shivered and brought her focus back from the trees. It was a mistake. Now she had nothing else to look at, nothing to focus on but the man standing in front of her. Unnerved, she dropped her gaze to his boots, to the rough denim of his jeans, even the heavy stick in his hand, anywhere but his face.

“Does he belong to you?” she asked, stalling. “I’ve read that wolves sometimes attach themselves to people, becoming as tame as dogs.”

“The wolf belongs to himself.” His voice had turned impatient, irritated even. “We need to get out of here.”

He handed her the branch, and she pulled herself upright, but her ankle hadn’t miraculously healed itself in the last few minutes. The moment she put weight on it, it buckled beneath her. Only this time, large masculine hands caught her and kept her from falling. Without warning, the stranger lifted her into his arms.

Fear caught in her throat, paralyzing her in a way the mountain lion had failed to do. She recognized the panic for what it was and struggled to control it. “Put me down,” she demanded, though it sounded more like a plea even to her.