Rough Around the Edges 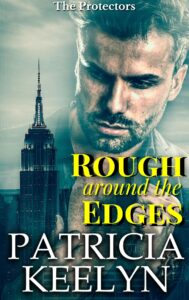 Tunneling his fingers into his hair, he rested his forehead against the palm of his hand, staring at the large manila envelope lying unopened on his desk.

Two years earlier he’d taken early retirement from the army and put everything he had into a rundown strip of stores in his old neighborhood—the neighborhood where his father had deserted his family, and where an eighteen-year-old Alex had been arrested for breaking and entering. The neighborhood the military had helped him escape.

Buying the buildings had been the beginning of what Alex planned to turn into a safe haven for kids, a community center where no matter how bad their home life, they’d be given a fighting chance. He wanted to do for the young people of this neighborhood what the army had done for him: show them there were ways out. Safe, legal ways.

Now, everything he’d worked for hinged on the contents of an envelope he couldn’t bring himself to open.

Pushing back from the desk, he stood and turned toward the open windows. The damp heat pressed in on him, but he hardly noticed. The heat was familiar, an element he knew and understood. While this other, a system determined to break him now that he was finally playing by its rules, remained incomprehensible.

Absently, he watched several neighborhood kids shooting hoops. The basketball court had been last winter’s addition to the center. Several local businesses had donated the materials, and he and a group of older boys had done the work. Afterward, they’d hosted a neighborhood barbecue to celebrate.

Such a small thing: a basketball court.

Yet it had already drastically changed one boy’s life–a kid who a year ago had been restless, bored, and toying with drugs. Now the natural athlete was being scouted by college recruiters and coaching grade-schoolers in the afternoon.

Alex turned back to his desk and picked up the envelope. He couldn’t put it off any longer. The fate of the center rested on its contents. Before he could change his mind, he tore it open and read it quickly. Then the form letter crumbled in his fist as his last hope of saving the center faded away.

Startled, he looked up.

LJ Jones, his friend and partner, stood in the office doorway. “Hey, man, you okay?”

Alex pulled himself together. “Fine. What’s up?”

LJ, evidently not convinced, hesitated, but finally let it slide. “Come on out and take a look.”

Alex followed LJ through the center’s main room to the door leading out into the shop area. Several boys hovered around an old Ford Mustang they’d been working on for months. LJ had found it in a junkyard, minus the engine. Since then, it had been his pet project to teach the boys about repairing engines by guiding them through the building of one.

Now, proud as any new father, he crossed his arms and nodded to one of the boys. “Okay, show the man.”

The boy climbed into the old car and turned the key. The engine roared to life, and a cheer of triumph rose from the group standing nearby.

Alex knew then what he had to do.

Fifteen minutes later, he picked up the phone and dialed a number from a card he’d nearly tossed away a dozen times. When the man on the other end answered, Alex said, “Sal? Jamison here. I’ve changed my mind.”

Alex cut him off. “Just tell me the terms.”

“Sure, sure. No problem. A thousand up front. Win or lose. Five if you win.”

“Two up front. Seventy-five hundred if I win.”

Two thousand wouldn’t cut it, but then, he had no intention of losing.

“Can’t do it.” Alex could almost see the man squirming on the other end of the line. “Not the first time out. You’re an unknown.”

“Then I take my talent elsewhere.”

“Hey, Alex, I discovered you. Give me some time. I can make you rich.”

“I don’t want rich, Sal. I want two thousand up front and seventy-five hundred if I win. Otherwise, there’s no deal.”

Sal hesitated but evidently thought better of pushing his luck. “Okay, okay, you got it. I’ll set it up.”

“Tomorrow night. I’ll pick you up at nine.”

“No. You’re not to come here. Ever. I’ll meet you somewhere outside of Miami.”

They made arrangements to meet in Ft. Lauderdale, and when Alex hung up the phone, he had to suppress the urge to immediately go wash his hands. He reminded himself why he was doing this: the center and the kids who’d come to depend on it. These kids defined courage, and he couldn’t—wouldn’t—fail them now. He’d been fighting for months to save this place but had been going about it the wrong way. He’d been playing by the rules.

Now he planned on doing things his way.