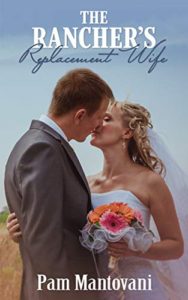 Another lovely romance by Pam Mantovani. In this story, Ms. Mantovani seamlessly weaves the romance with love of family. In this case it’s the hero and heroine’s love of a child. Add that element to wonderful characters — Graces’ name fits her perfectly, and who can resist a single dad who happens to be a cowboy — sparks that jump of the page, and strong writing. Well done!!

Back Cover Copy
Private school teacher Grace Winslow has been attracted to Aaron Richardson since the day her rebellious younger sister married the rancher. After her sister deserts Aaron and dies in a car crash, Grace helps Aaron look after her nine-month-old nephew, Noah, who suffers with chronic ear infections. She’s determined to keep things platonic, but when Noah needs an operation Aaron can’t afford, her guilt over her role in enabling her sister to leave leads Grace to propose marriage as a means to provide insurance coverage for her nephew and save Aaron’s ranch from financial ruin.

Even during his hasty, disastrous marriage, Rancher Aaron Richardson had been intrigued by his late wife’s sister. Now he’s struggling to work on his ranch during the day and nurse a sick son at night. He’s grateful for Grace’s help during the evening, and powerfully attracted to her. But Aaron won’t act on his attraction because Grace is everything he’s not: refined, delicate, educated. Still, he agrees to her unexpected marriage proposal only to help his son Noah get the medical care he needs. Soon they develop a bond forged out of mutual respect and trust as they care for Noah and the ranch together. But for a man who values and respects honesty, he’s hiding a secret from Grace about his role in allowing his wife’s desertion.

Now only the love that’s blooming between them can save Aaron and Grace from the repercussions of the truth when it’s revealed.