I’ve been tempted more than once to write a character into one of my books who needs to be tortured or knocked off.  Admit it, we all have a person or two who’s crossed our path that we’d really like to  . . . well, kill off in a book.  So far, I’ve managed to resist the urge.

However, I’ve been getting some lovely reviews on Keeping Katie lately, and one in particular reminded me of a character that was modeled after a real person.   Here’s the review:

Personally I really liked this story. The main characters, Maura, Katie and Alan. There were also interesting secondary people too. Aunt Rita was such a loving, giving person and she just drew both Katie and Maura into her family. The story was kept my attention and there were several other subplots to the story swirling around too. It was an emotional  . . . with good people who were sure they were right. Black and white is what they saw, but the things that are going on cause them to begin to question just how true that was. Maura’s odd relationship with her father also added something to the story. Alan was a determined kind of guy, who I liked. He was also a strong but tender man at times. The romance was good, with Alan’s perception on how to handle Maura often hitting its mark. Maura was often torn about her decision to run with Katie and lying to people. But her main focus is to protect Katie.

I liked the dual P.O.V.’s from both Maura and Alan. 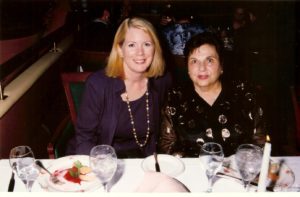 Nice, right?  But the part that warmed my heart was the sentence about Aunt Rita.  “Aunt Rita was such a loving, giving person and she just drew both Katie and Maura into her family.”

In the book, Aunt Rita was modeled and named after my mother-in-law, who was one of the best, kind-hearted women I’ve ever known. We lost her last year, but this review reminded me that she’ll always be with us.

So, the review made me happy, in more ways the one. And how fitting that it was posted on Mother’s Day.

This entry was posted in A Mother's Heart Series, Book Reviews, Keeping Katie. Bookmark the permalink.

4 Responses to A Mother’s Day Tribute